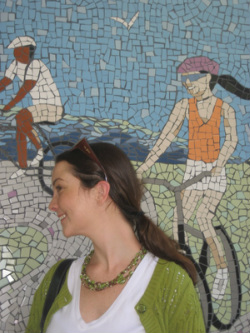 After working as a mosaic artist for 15 years or so, I have come to realize that my passion is to create public art murals. Right from the start, my first classroom teaching experience in 2001 produced a mural at the
Truro Center for the Arts at Castle Hill. The enthusiasm that the students showed ignited my quest to continue these works. In 2002, I became an adjunct professor at Cape Cod Community College and helped the students create a number of murals that are permanently installed on campus. Even now, I get the biggest kick out of introducing eager minds to the world of mosaic art. Next, I created a  3'x5' rendition of a Great Blue Heron and a lighthouse which was commissioned to do for the Cape Cod Hospital. I used a design that I had created for the Truro project as a guide ( you can also see that concept in other murals that I have done).

Later, some restaurants commissions were secured and I enjoyed making tabletops and wall art for an oceanfront restaurant and a Mexican eatery. As word spread of my talents, I created a company,  named it
"Cape Cod Mosaic Workshops" and began to earnestly work teaching hundreds of students and building various commissions for clients.

In 2010, as Cape Cod Mosaic Workshops I have had the pleasure of working on much larger scale murals. The Friends of the Falmouth Bikeways commissioned me to build a 20 'x 4' mosaic mural to be placed along the Shining Sea Bike Path. The size seemed daunting at first, but then I realized that it was simply a small mosaic that tripled in size!  No problem. I put together a dynamic team of my best former students and artist friends and we worked throughout the winter of 2009 in an unheated storefront. A particular memory is of the time when the Morse Pond School kids walked over and saw the mosaic. We allowed each of them to glue a piece of tile in the mosaic. The letters we received from them were precious. Six hundred man hours and 20,616 pieces of tile later it was complete. Lead artist, Linda Dadak ( I couldn't have done it without her) and illustrator Erica Szuplat were instrumental in this project.

The following year, Linda and I taught a workshop at the National Mosaic Exhibition on Cape Cod. Here we taught 18 would-be artists and some other excellent mosacists to produce a mural for the Falmouth Dog Park. Called Cleo's Corner. It was also an Erica Szuplat design.

In June, 2012 I was honored to work as an Artist in Residence at Rochester Memorial Elementary School. With art teacher, Joanne Smith as a guiding force, we taught the students and their parents to create individual leaves which, when cemented to the main entrance hallway, became a "Tree of Learning". It was so much fun working with he K-6 grade children. Their excitement for mosaic art is reassuring that this ancient art form will continue long after we are gone.

You can see photos of these projects in the slide show above. 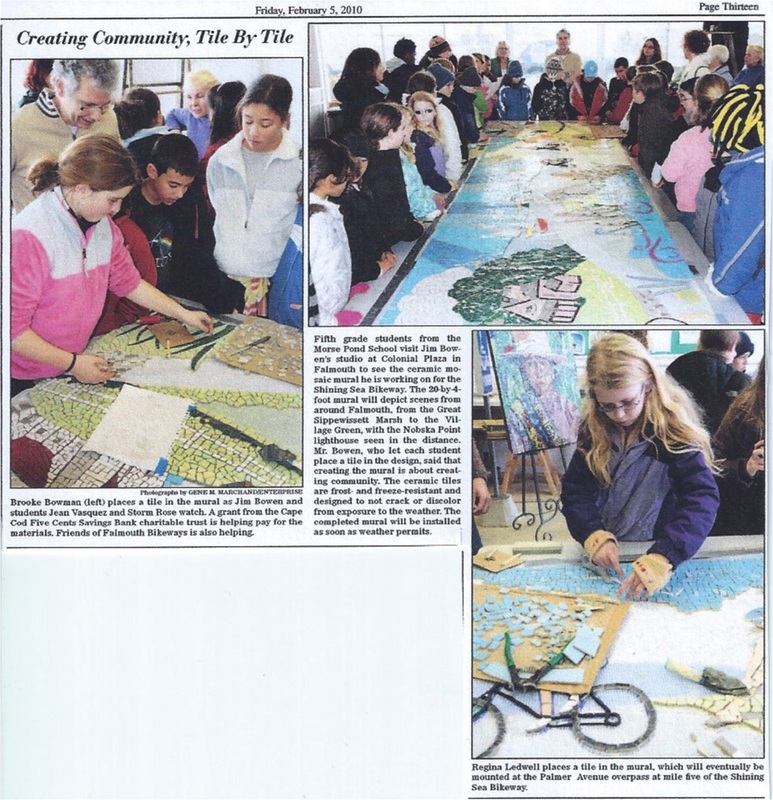